Okanagan, BC – Travel to Wellness at Sparkling Hill

It is -110 C and hard to even begin to fathom that degree of cold, yet I was about to expose myself to just that level of extreme temperature, wearing shorts and a t-shirt.
Why? Because I’m visiting Sparkling Hill Resort in the Okanagan region of British Columbia, and the cold sauna is one of their signature treatments. Also called cryotherapy, it was developed by Japanese and German rheumatologists as a remedy for arthritis, explains Paul Bradshaw, staff kinesiologist, who is leading us through this unusual procedure.

“The cold relieves inflammation resulting in less pain and more mobility,” says Bradshaw. Besides arthritis, it is also used to treat athletic injuries, insomnia, depression, auto-immune disorders and to accelerate recovery after surgeries. Generally, two sessions a day for a minimum of five days is recommended to see significant results, but it can be done as a one-off treatment.

Rejuvenating? Mmmm, tortuous seems a better word for it, but I’m about to find out. The waiver’s been signed, blood pressure taken (a little on the high side, but not enough to get out of the treatment) and ear-covering headband, mittens and surgical mask are on. Here we go.

The first chamber we enter is a mere -15C, the next one is more like a freezer at -65C and much too soon we’re in the final chamber, chilled to a ridiculous -110C, where we are supposed to stay for three minutes.

It’s so shockingly cold that it almost doesn’t register. We’re going around in circles shaking our arms as instructed while music blares in the background. Despite my skin prickling likes pins and needles are being jabbed into me, I laugh at the ironic Bob Dylan lyrics of “Don’t Worry, Be Happy”, and amazingly I make it to the end of the three minutes. Not everybody does. Five minutes after getting out, I’m still laughing, giddy as though I drank too much champagne. This euphoria lasts for about 30 minutes. Apparently, it’s not an unusual response.

“It’s your body releasing feel-good hormones,” Bradshaw says, and elaborates on the dopamine response and the increased intake of oxygen you experience during the treatment.

Of course, maybe I’m just happy to be alive, but whatever it is, I surprise myself by admitting I would actually do cryotherapy again.

A Vision of Wellness

If cryotherapy doesn’t appeal to you, the 40,000-ft KurSpa has over 100 different combinations of treatments to choose from, depending on your needs.

“We don’t look at the spa and its treatment as a decadent luxury, but as therapeutic,” explains Dean Tarasewich, spa manager. “If you’re in the steams and saunas, you’re sweating out toxins, improving your circulation, relieving pain……it’s all taxing on the body.”

Truth be told, none of it feels very taxing. The saunas and steams here are more decadent than any I’ve been to, and I’m spoilt for choice. Should I try the sweet-scented rose steam, the salt steam or the herbal dry sauna? Or maybe the classic Finnish sauna, crystal steam room or the aqua meditation room? Even the showers are out-of-this world, and include one that simulates a gentle rain and another, a tropical storm complete with thunder and the scent of an orange grove.

After we’re steamed and saunaed out, we venture outside to the infinity hot tub and gaze at view of the turquoise Lake Okanagan surrounded by the Monashee Mountains. It’s a truly stunning sight and one you’re never very far from at the resort. Whether you’re drawing open the blinds on the floor-to-ceiling window in your room, stretching in the exercise room, or enjoying fabulous meals in the PeakFine dining room, the view of Canadian wilderness at its grandest greets you.

Taresewich says that the most satisfying part of his job is seeing how people transform when they’re here.

“They come in really wound up from cities and within a short time they’re a totally different person, relaxed and expressing gratitude for their time here.”

Personally, I feel calmer than I’ve felt in the long time. I credit it to the combination of nature views, wonderful meals, and the spa, but perhaps there’s something even more?

Dr. Ray Lendvai, the resident Naturopath tells me that this is a native healing ground. “There’s something going on with the rock underneath,” he says. “You feel good here.”

Yes, whatever the reasons are, you most certainly do.

The 152-room resort, owned by Austrian Gernot Langes-Swaroski, the illustrious head of Swaroski cystals, opened in 2010 at a cost of over 120 million. It shouldn’t be a surprise then to find so many of the sparkling gems in the hotel – more than 3.5 million crystals in all. You’ll find them everywhere, from the grand chandelier in the entrance and sculptures in the dining room to the crystal fireplaces in the rooms and tastefully in-laid in door handles and even the backs of chairs.

All amenities, including the steams and saunas are included in every stay and only guests have access to Kurspa (cryotherapy excepted), and use of their facilities. They have a multitude of wellness specials that range from introductory two-night health and wellness packages to weeklong wellness retreats that focus on specific health concerns, including weight loss, cleanse and detox, and an athletic recovery program. One of their most popular is the Stay Young and Healthy for 55+ that focuses on kick-starting a healthy lifestyle and tailors a program for each individual depending on their needs and goals.

Sparkling Hill is situated about 20 minutes from the town of Vernon, a year-round tourist destination in the Okanagan known for its golf in summer and skiing in winter. Wineries, distilleries, orchards and farms, provincial parks and a wide array of local attractions make it a popular mountain escape.

On our third and final day we manage to get out of our now uniform fluffy robes and explore the region. We drive up into the Monashee Mountains to Silver Star, a ski resort known for its abundance of powder snow and uncrowded varied terrain. The village itself has instant charm, partly due to the requirement that all buildings are painted at least five colours. The effect of this combined with the blanket of snow creates an enchanting winter wonderland, which is fitting because the skiing here is pure magic.

Their Nordic trail system is among the largest groomed trail system in Canada, and their downhill trails have 115 runs on 1,240 hectares of skiable area. Combine this with 700cm of snow annually and an average daytime temperature of -5 and you can’t ask for anything more.

What I love as a novice skier is that the long beginner run I choose (Far Out Trail) has both spectacular vistas and very few other skiers on the slopes. I’m able to make my way down as slowly as I want, stopping to take pictures of the snow ghosts (trees completely covered with snow) without worrying about being knocked down. I keep pinching myself to see if this is real.

When I rave about this experience at the end of the day, a ski instructor says that this is the rule rather than the exception on the mountain. In fact, he tells me, the uncrowded vastness was the reason he left his corporate job on Toronto’s Bay Street to become a ‘ski bum’ here.

Back at Sparkling Hill in the evening melting away my sore skiing muscles in the steam rooms, I dream about moving to Okanagan myself. 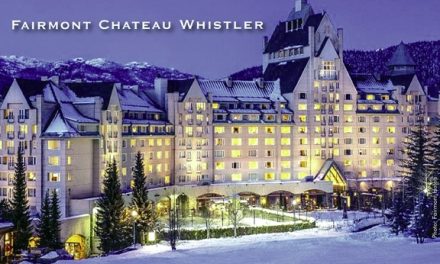 Whistler, BC – Going above and beyond at the Fairmont Chateau Whistler 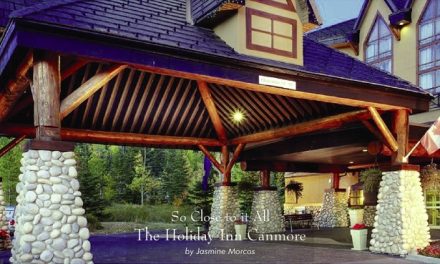 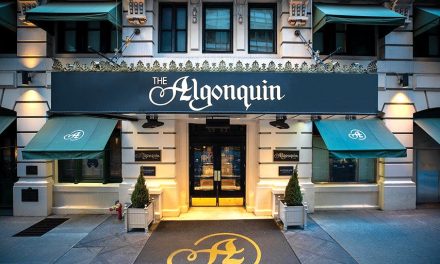