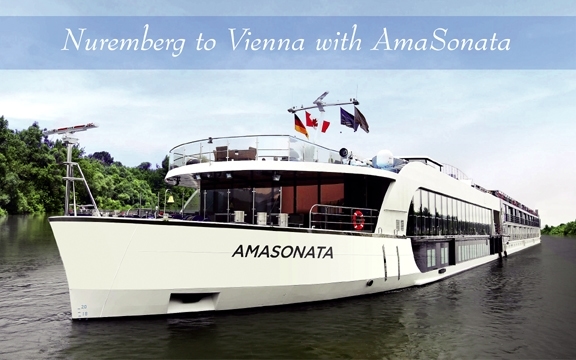 Cruise
Nuremberg to Vienna with AmaSonata
by Olivia Balsinger

I recently had the opportunity to discover Europe’s powerful Danube River aboard the AmaWaterways ship, AmaSonata, which first launched in 2014. This was my first river cruise and I quickly understood why this cruising trend is so popular. AmaSonata offers not only top-notch amenities, but also has a considerably relaxed vibe.

True to AmaWaterways philosophy, all daily excursions were covered in the cruise price, with the exception of a few optional tours. In their effort to promote an active and adventurous lifestyle and attract passengers that are more physically adept, the excursions usually consisted of hiking, cycling, and long walking tours. On this Danube cruise, for example, passengers had the option to hike to the hilltop castles in Passau, Germany, and Durnestein Austria. It also has longer excursions like a full-day tour of Salzburg, Austria, or a half-day tour of the medieval Czech city Cesky Krumlov. AmaWaterways makes it easy to stick to your pace by dividing the activities of into three levels. And now let me tell you a bit about my adventures.

I embarked in Nuremberg the first day, settling into my temporary home-at-sea before setting out to explore. Nuremberg, a city marked by its prolific place in history’s most historical moments, shows its complex layers on the facades of its buildings; medieval churches are harmonious, adjacent neighbors to post-modern buildings. As a powerhouse of the German Industrial Revolution, the city had a particularly influential role in the World War II era, serving as the stage for Nazi rhetoric to infiltrate the ideology of Germany’s working class. Desiring to delve into the thick chapters of this era, I decided to take the World War II tour offered as an excursion, which took me to the specific locations where history was made.

After a comfortable night’s sleep on board, I woke up the following morning in Regensburg — a city situated at the northernmost point of the Danube River, known to some as the most Italian city north of the Alps, as well as “Germany’s medieval miracle.” An ancient town with a modern flare, careening its narrow streets is enough to recognize its charm, amplified even further by the marvelous medieval structures (the best preserved in the country). Missing my two wheels back home, I opted to take the Guided Bike Tour to Walhalla — an impressive Neoclassical building, first conceived in 1807 in order to support the unification of the German States. Its function is laudatory, as it serves as a memorial to some of the most influential people in German history. It houses some 65 plaques and 130 busts of famous figures throughout 2,000 years of history. It was a comprehensive experience that introduced me to some of the most prominent people in German culture, all within a gorgeous interior reminiscent of an opulent Greek temple with Versailles sensibilities.

The next day brought our ship to Passau, where I was again drawn to the option of a biking tour to both curb my recent indulgence of delicious Bavarian confections, as well as cover as much ground as possible. The tour went from Passau to Erlau. Highlights included seeing the confluence of the Danube, Inn, and Ilz Rivers. After crossing the Ilz Bridge, we rode down the breathtaking coast of the Danube River, which brought us to the largely untouched, pristinely bucolic Donauleiten Nature Reserve on the southern edge of the Bavarian Forest. Nestled between steep wooded slopes on one side and the mighty waters of the Danube on the other side, the area seems like an illustration ripped out of the pages of a fairytale

We arrived in Linz the following morning — a town known for its bustling music and arts scene as well as its cultural institutions, from the Mozart House to the Lentoz Museum of Modern Art. It was hard for me to decide which AmaWaterways activity to take, but, feeling rather adventurous I chose the long excursion to Salzburg, a charming city known for its beautiful baroque buildings, its religious history, and as the birthplace of Mozart. Beginning in Linz, we first past the lakeside town of Munsee, which many know as the site of the wedding church in the Sound of Music! When we arrived in Salzburg proper, a tour of the historic center gave us some bearings to explore on my own during free time.

Melk was our next destination, which is located next to the picturesque Wachau valley on the Danube in lower Austria. Here I visited the marvelous Melk Abbey, which is one of the largest and most impressive Baroque monasteries in all of Europe. Founded in the eleventh century, Melk Abbey was originally a residence for Benedictine monks, it now houses a museum dedicated to its history, with a library with a fantastic collection of medieval manuscripts that served as the inspiration for Umberto Eco’s gorgeous, tragic novel “The Name of the Rose.”

Arriving in Vienna was bittersweet: I was sad that my journey was coming to an end, but elated that I had the chance to first explore romantic Vienna, Austria’s capital. Following my time onboard, I spent an entire two days exploring this musical dreamland, resting my head each night at the boutique Hotel Grand Ferdinand Vienna, conveniently located in the center of the city, walking distance to Stephansplatz, with panoramic views and a rooftop restaurant. I especially enjoyed the historic architecture, in a 20th-century European grand-hotel tradition, providing a unique escape from the modern day (but with modern comforts available, of course!)

With the Vienna Pass (with tagline “The Sightseeing Pass to Vienna”), I enjoyed many architectural marvels and lush gardens of the city, making stops at the stunning Vienna Opera House, St. Stephen’s Cathedral, as well as the Ringstrasse — a ringed road rife with beautiful Baroque buildings, fascinating monuments, and lovely parks. I explored Kartnerstrasse, not only the most famous shopping street in all of Vienna, but home to the best traditional Austrian pastries!

Of course, my time onboard was just as fulfilling as in port, thanks to the quality and luxury of the AmaWaterways brand. The ship is large enough that overcrowding is rarely an issue. The main public areas are the dining room and the main lounge, both of which are spacious and well-illuminated to provide an open and airy setting for quiet thoughts and quick escapes. Each of its 81 cabins also strive to maximize the living space, most of them boasting two balconies — one of which is a French balcony and the other an adjoining platform that can sit two people comfortably. The cabins are separated into nine categories, ranging from staterooms, from 160 square feet, to suites, up to 300 square feet. Each cabin also comes equipped with a flat-screen TV, which has access to 25 channels. There is also a mini bar, complementary robes and slippers, a hair dryer, and an umbrella.

Entertainment is also provided consistently throughout the day, with a keyboard player in the Lounge during lunch, at teatime, and after dinner. At some ports, outside entertainment may sometimes also come onboard. The main entertainment venue is the Violin Deck, where morning pastries, light lunches, tea goodies, and late night snacks are served on a bow-shaped buffet in the middle of the boldly floral, airy room. There is a panoramic window that provides lovely views, and plenty of cozy sofas perfect for conversations or some reading time along. On the Sun Deck, there is a small heated pool, with a swim up bar at one end. In addition to the daily excursions, the free use of bicycles, wine at lunch and dinner, and a reliable Wi-Fi signal were all included in the cruise price, ensuring a hassle free adventure with AmaWaterways. 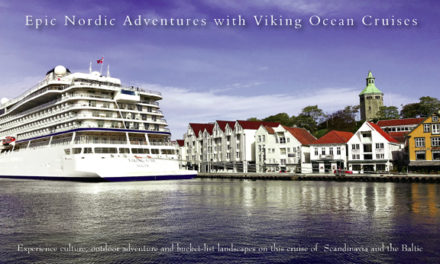 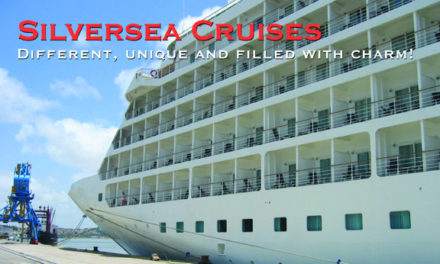 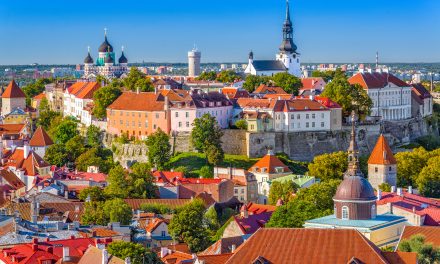 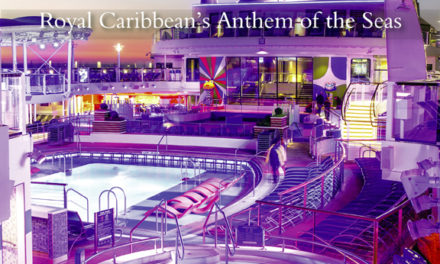